The most prominent oil fields and ports in Libya (map)

Read in this article

Oil sector turmoil in Libya is back again, with armed clashes in the country; due to power struggles.

The protesters want to put pressure on the oil sector, to respond to their demands of transferring the authority of the government of the current Prime Minister, Abdel Hamid Dabaiba, to the Government of National Stability headed by the former Minister of Interior, Fathi Bashagha, who was commissioned by Parliament last February to form a new government.

On the other hand, Dabaiba is sticking to staying in office until the national elections scheduled for next June.

With the growing protests, the Libyan National Oil Corporation was forced to declare a state of force majeure in the El Sharara and El Feel fields and the ports of Zueitina and Brega, last week.

According to the statements of the Libyan Oil Minister, Mohamed Aoun, the state’s revenues as a result of the repeated closures of many oil fields and ports lost about 60 million dollars per day.

In light of these developments, the Energy Research Unit reviews in the following lines the most prominent oil fields and ports in Libya.

At the end of last year, Libya’s oil reserves amounted to 48.36 billion barrels – unchanged from the 2020 estimates – according to the data of Oil & Gas magazine, which puts it at the forefront of African countries in terms of proven reserves.

This comes with the presence of many oil fields in Libya, which were discovered for the first time in 1959, through the fields of Al-Amal and Zaltan, with the continuation of discoveries of many offshore and onshore fields.

The oil fields in the eastern Sirte Basin – located east of the Gulf of Sirte – constitute a third of Libya’s production, pumping 350,000 barrels per day.

In the southwest of the country, is the Sharara oil field, which was discovered in 1980, and is the largest Libyan field, with its production capacity exceeding 300,000 barrels per day.

The El Feel field is also located in the southwest of the country, with a production capacity of approximately 70,000 barrels per day.

In the southeast of Libya, the fields of Sarir, Masala and Jalo are located, as well as other fields such as Al-Mabrouk, Al-Hamada, Abu Atfal, Intisar, Al-Nakhla, Al-Nafoora and others.

It is worth noting that Libya’s oil production fell by 37,000 barrels per day last March, to reach 1.074 million barrels per day, according to OPEC’s monthly report.

Libyan oil production is expected to decline sharply this month, after field closures, which pushed supplies down by about 350,000 barrels per day last week alone.

In 2021, Libya’s oil production reached 1.14 million barrels per day, up from 367,000 barrels per day in 2020, according to figures monitored by the Energy Research Unit from the monthly OPEC report. 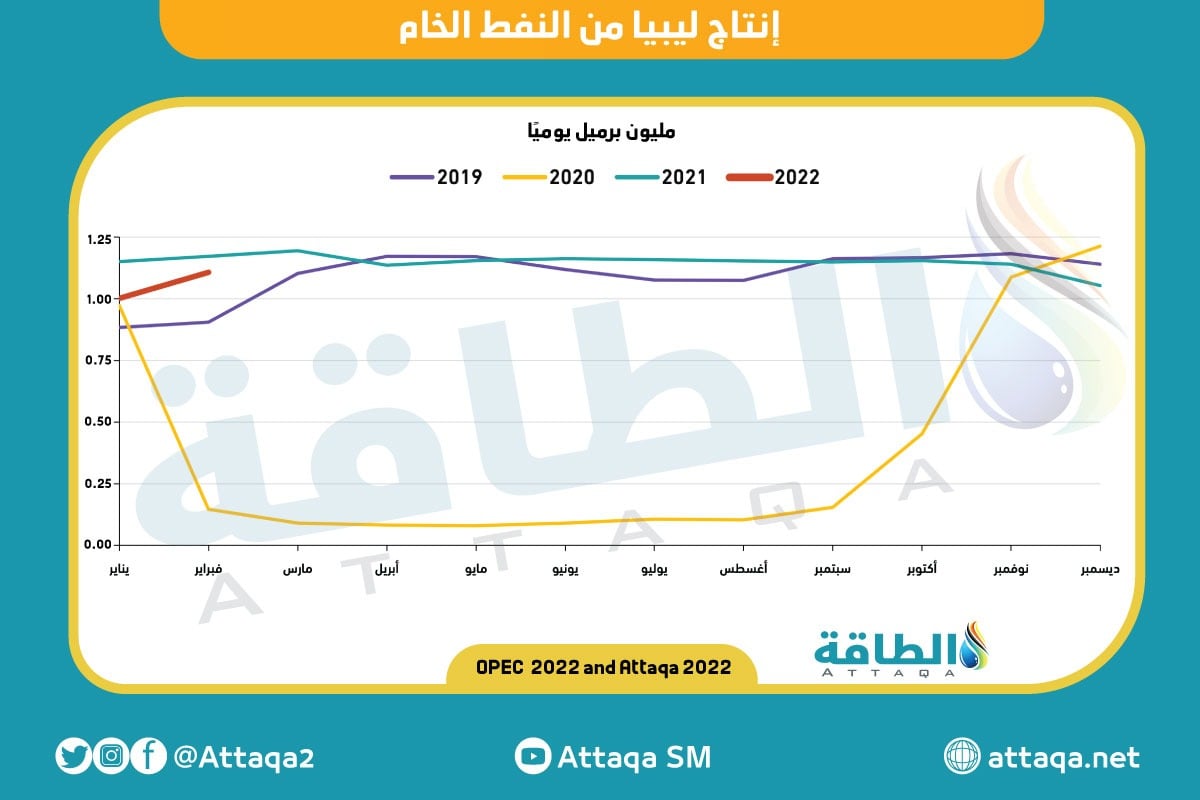 Libya’s oil exports were also hit with the closure of Brega and Zueitina ports last week.

Zueitina port is located in the Gulf of Sirte, 180 kilometers southwest of Benghazi, and began exporting the first shipment of crude oil in 1968, according to data from the Zueitina Oil Company.

Libya’s oil exports through Zueitina port amount to nearly 20% of the total.

Brega oil port is also one of the most important ports in Libya, as it witnessed the export of the first shipment in 1961, and its export capacity is about 60 thousand barrels per day.

While the Zawiya oil port is located in the west of Tripoli, and includes the largest oil refineries in Libya, with a production of 120,000 barrels per day, owned by the Zawia Oil Refining Company.

The port of Sidra, which is located on the Gulf of Sirte, is the largest oil port in the country, and it is adjacent to the port of Ras Lanuf. In addition, there is the port of Melita, west of the capital, Tripoli.